Alas a Funeral first… my uncle Peter died at the age of 91 on the 3rd August, fortunately with my aunt Sheila and his family all at home – my cousin Mark and his wife Sally having come to stay from Australia with their two sons Ben & Nicholas. The funeral was last Thursday and I was honoured to do the Tribute for him. I was very fond of Peter and though he suffered Alzheimer’s in his latter years he always seemed to recognise me until just a few months ago. Thanks to Ma & Pa, my brothers and I all stayed at Down Hall with our respective partners, where a massive “Essex” wedding was taking place over the two days we were there. We couldn’t fault the staff and the food was exceptional (and so were the prices of the wine!) A good place to base ourselves for Peter’s send off, though I’m sure it was hard for Dad who was very close to his brother. They’d never once argued in the 89 years they knew each other.

The day after celebrating Peter’s life, Clive and I headed to Shropshire to our good pals Bob and Judith’s house for their daughter Hazel’s wedding to Dan Hedge (even their names are a perfect match!) Hazel had invited me to be ‘Bad Ass MC’, preforming a mock wedding ceremony which went down a storm. The house and garden were magnificent, the decorations exceptional and all the girls looked beautiful. Hazel’s three sisters Laura, Louisa and Tamsin along with Dan’s sister Zoe were bridesmaids, Dan’s brother Jake was best man, the neighbours helped with providing a car parking field and a camping field, other friends of Bob & Jude not only helped with the catering, they organised it all on the day including extra help to serve the food which included a hog roast and a whole roast lamb, salmon, salads to die for, and cake, cake and more cake. The cheese board was a table full of cheese and at midnight Bob made about 30 pizzas in his home made pizza oven for the hungry youth element who partied on until about 1pm the following day. Luckily the music switched off at 5am, just when the neighbours were heading to the fields to collect their cows for milking. Milk shakes more like as a superb firework display delighted all at about 11.30pm, sending all livestock to the furthest ends of their fields. 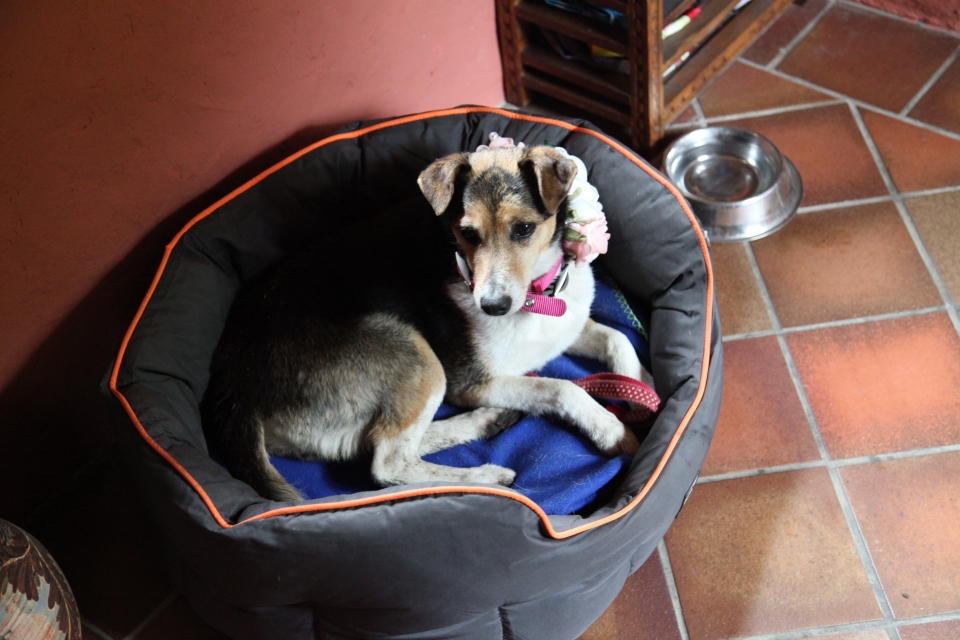 Lola watching the wedding guest coach arriving and below, ‘Bad Ass MC’ with the groom 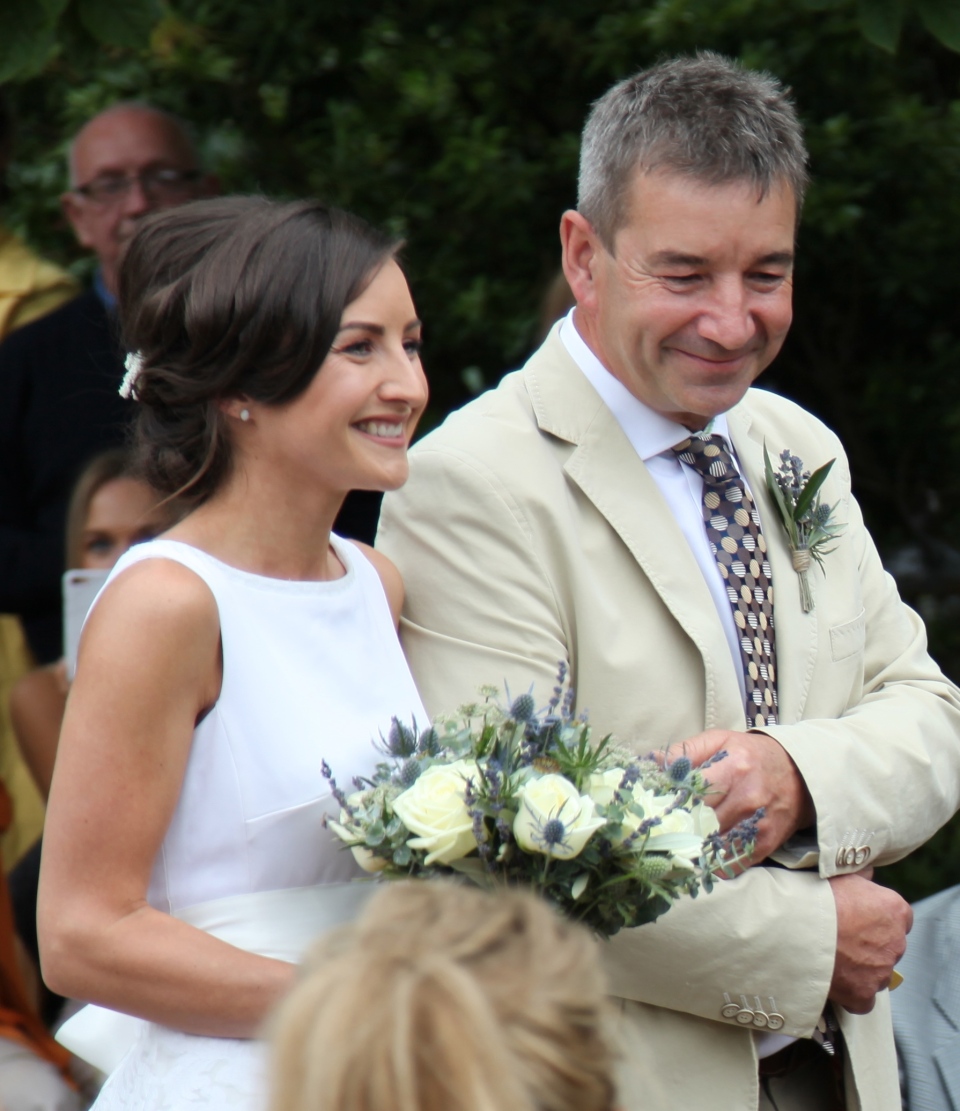 Bob proudly walking Hazel down to the wedding arch 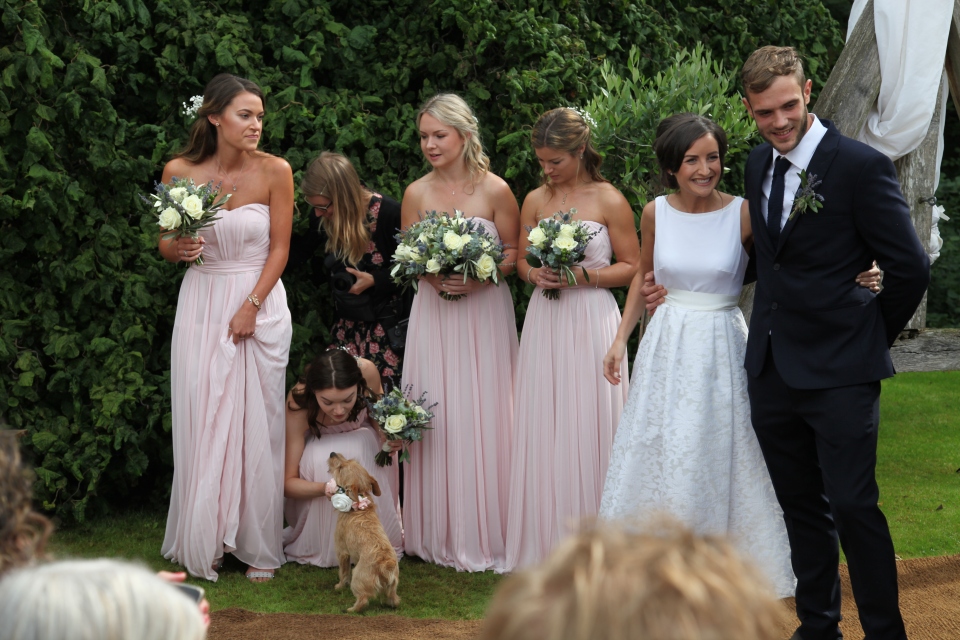 Dan and Hazel with (R-L) Laura, Louisa, Tamsin stroking Lola with Ollie the photographer behind her, and Zoe 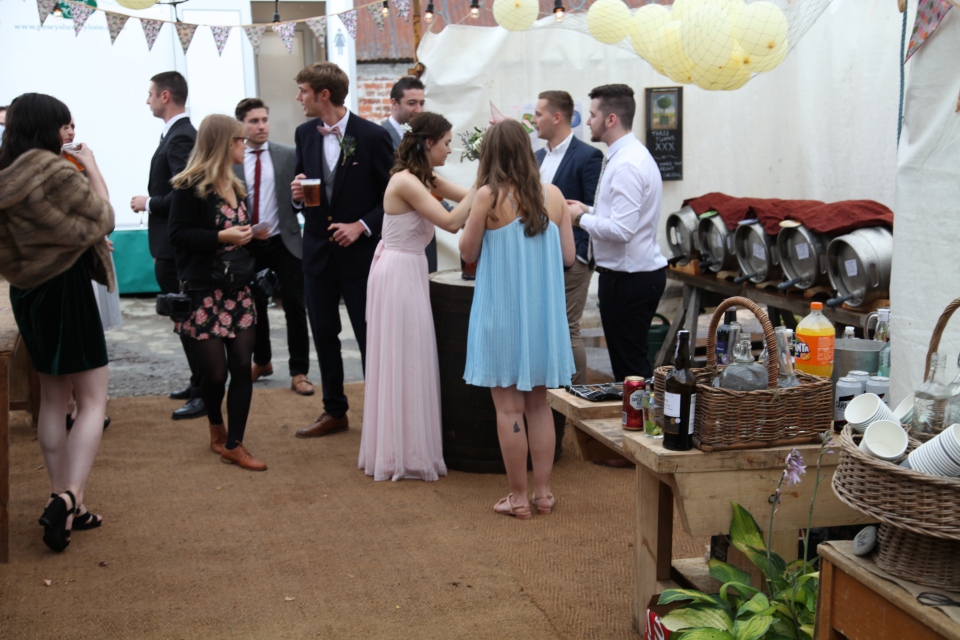 Five beer barrels with 150 guests – all the beer was drunk!

The wine store (with a huge lump of ice in the trough) and below the tables set out in the marquee, which Bob bought on Curlew for far less than the cost of hiring one…. and he does have another three daughters! Check out the chandelier.

Dan and his sister Zoe with Lola hangin’ in there 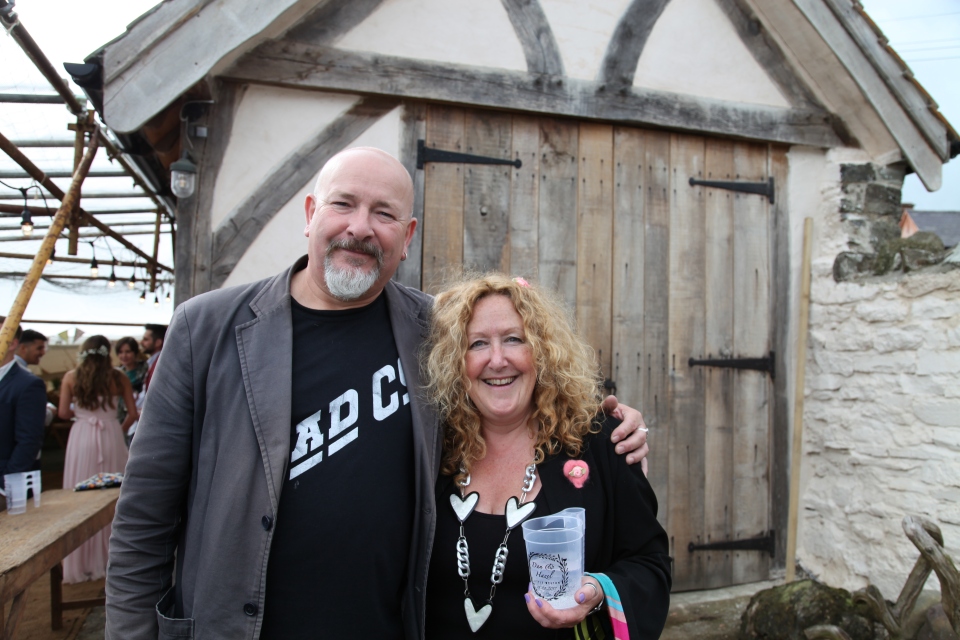 We met some fab people including Graham and Ollie, Donna and John, and Richard and Monica who own a small wood not far from here in Powys. Bob, Jude, Clive and I went over to John and Donna’s farm on Tuesday evening to see their Dexter cows. I’ve never seen a Dexter before and they’re like the Shetland pony of the cattle world.

The six of us plus a very farty dog Minnie then drove (with windows open) to Richard and Monica’s small forested acreage, laden with food and wine, for an evening in their ‘hut’ which Richard and Bob built a few years ago. We couldn’t however get the land-cruiser up the muddy steep track and had to slide all the way backwards to the bottom, hoping not to skew off the road which would have resulted in us toppling sidewards down a precipitous drop. Reception here is dire and of the six telephones in the car, only mine miraculously had one bar and we were able to alert Richard to our plight. Down he descended with snow chains on all four wheels, packed us all into the back and once again we flew through the trees and up, up, up into the dense woodland, over the brow of the steepest bit, round a hairpin bend and finally arriving at a magnificent front door of a one room cabin, with roaring open fire and views down through superb woodland on three sides.

At the top of the hill is a Grade II listed derelict cottage and Richard had discovered only that afternoon that it had recently been sold to a chap called Stephen who he promptly invited to join with the party that evening. It was a hoot. The first thing a few of us did was walk to the top of the hill and have a good nose round Stephen’s new home before carrying on along the ridge of the hill to explore a derelict castle dating back about 1000 years. It was abandoned in the 13th Century when the English ousted the last Welsh King there by cutting off the water supply. The castle’s population fled to the valley below where they built a new town which to this day is still called Newtown, though it dates from 1277.

Donna with the new neighbour Steve

Bob, John & Richard in front of the fabulous fireplace

Clive and I have done a few excursions over the last three days, to Powis Castle, Shrewsbury, Montgomery and Ludlow, and tonight we are thinking of going with Bob to see live music at the Vaults in Bishop’s Castle. It’s a beautiful part of the country, relatively unspoilt, green hills, lots and lots of trees, lovely hedgerows, cows and sheep everywhere you look. And the people aren’t bad either!

Powis Castle and gardens, including the plunge pool built in the 1700s 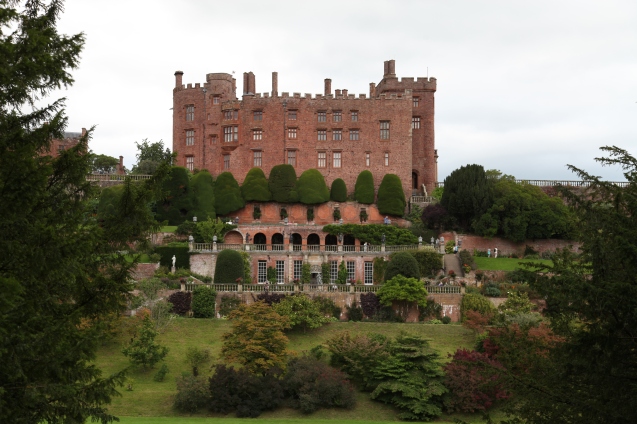 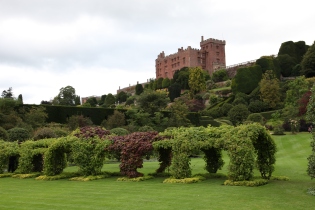 Check out those hedges!

We are heading home to Harwich at the weekend, hoping the holiday traffic doesn’t put a damper on the lovely break are having.