The festival continued to be full of surprises, with receptions and parties daily, starting with the Welcome Reception for Skippers on the Thursday, where the infamous Hubert Rubbens (the festival organiser) welcome speech was in Flemish, French and perfect English.

On the Friday evening we were all invited to the Captains Reception aboard a huge Russian four-masted tall ship called Kruzenshtern. This magnificent ship, originally German built, is used for sea cadet training and early in the event I surprised a canoodling couple of young cadets, clearly embarrassed to by caught sucking each others faces and fumbling at each others buttons. I soon put paid to that! One of the ship’s officers turned up a few moments later so I reckon I did them a great service. Blinis and caviar canapés abounded, yum. 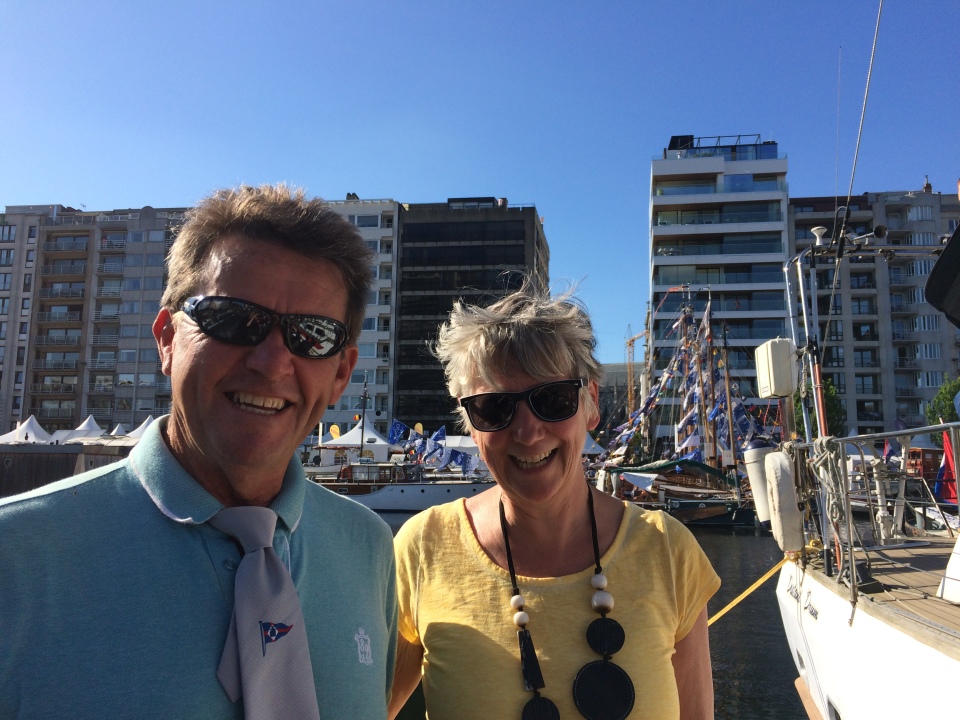 Howard & Sue looking cool on a hot day, itching to get to the four master 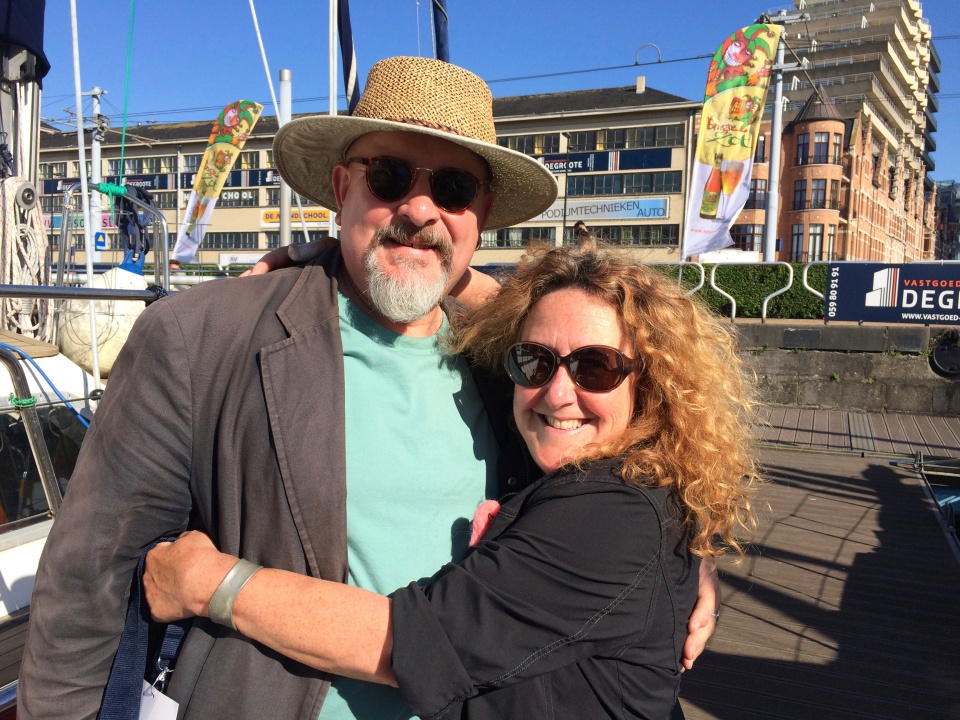 Perhaps not quite so cool, happy all the same 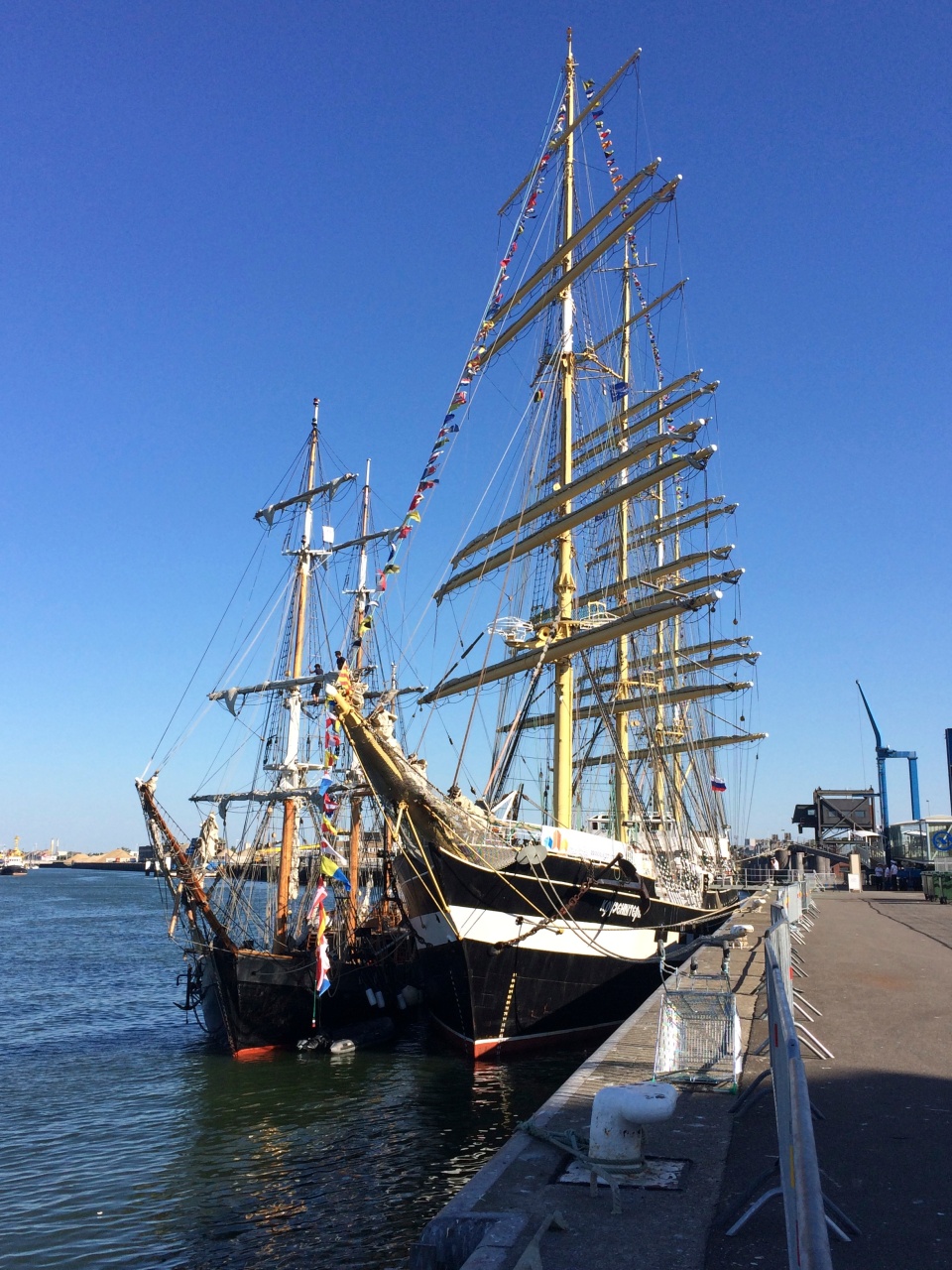 The Russian four-master with a little three master alongside 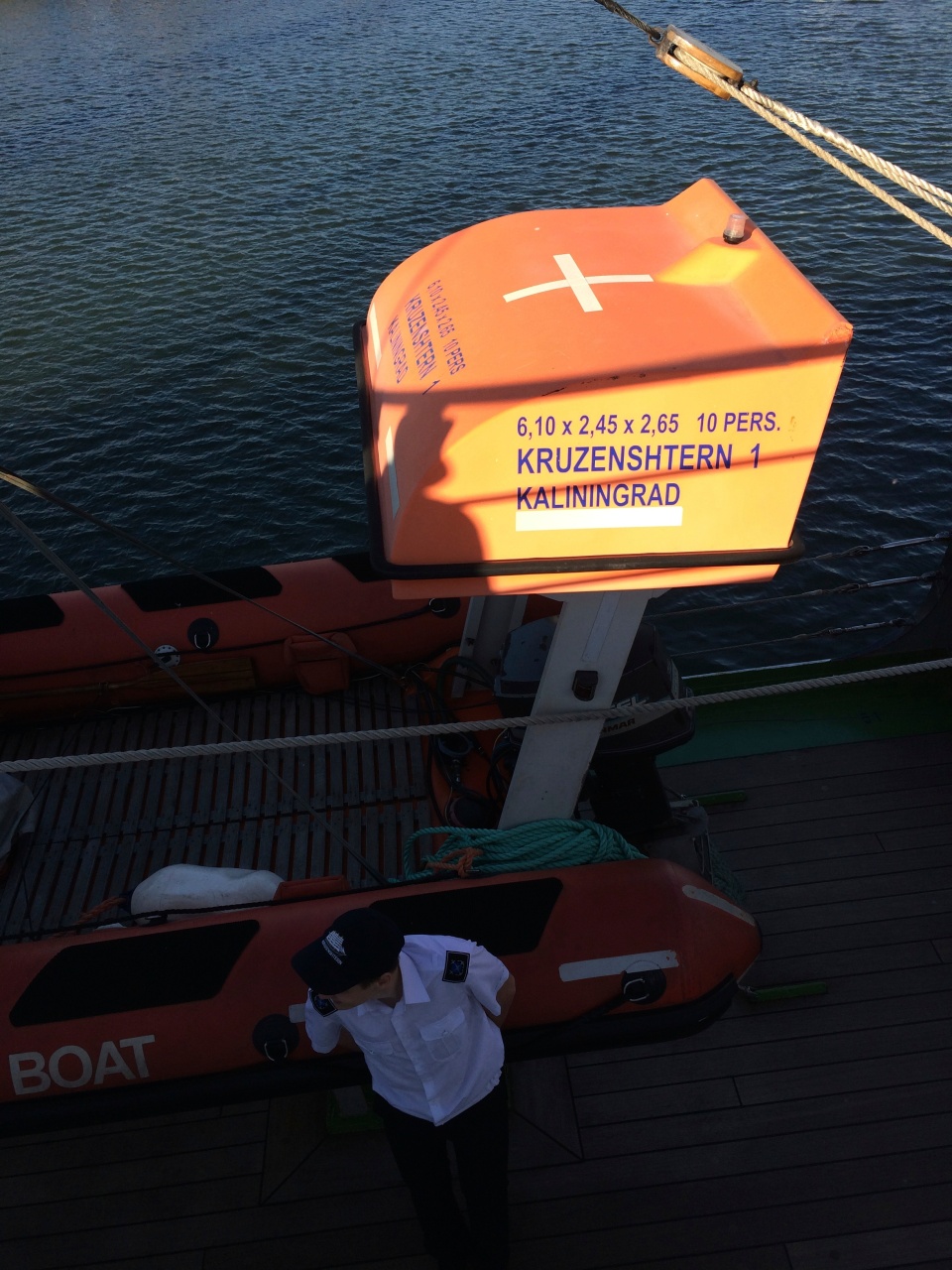 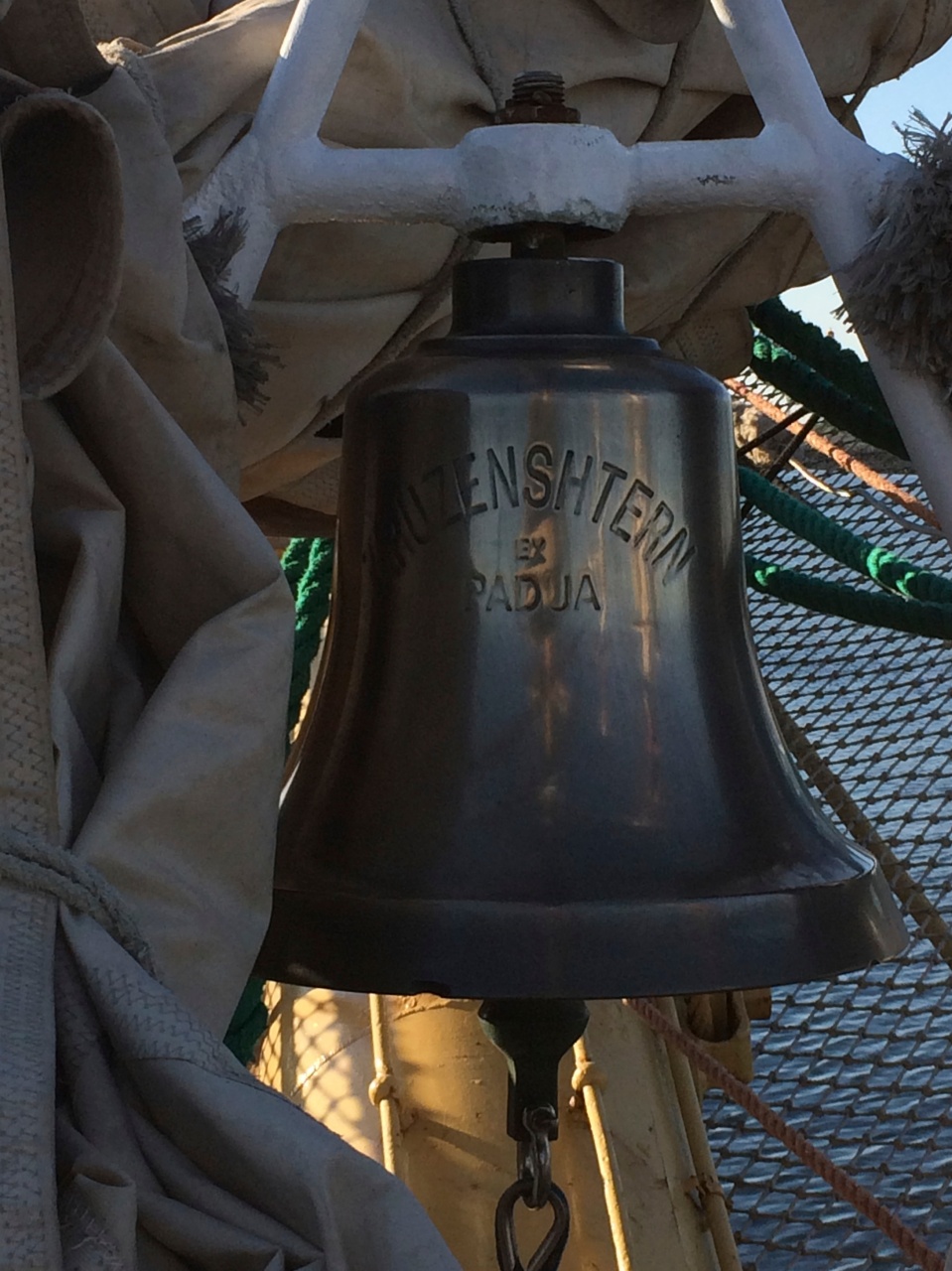 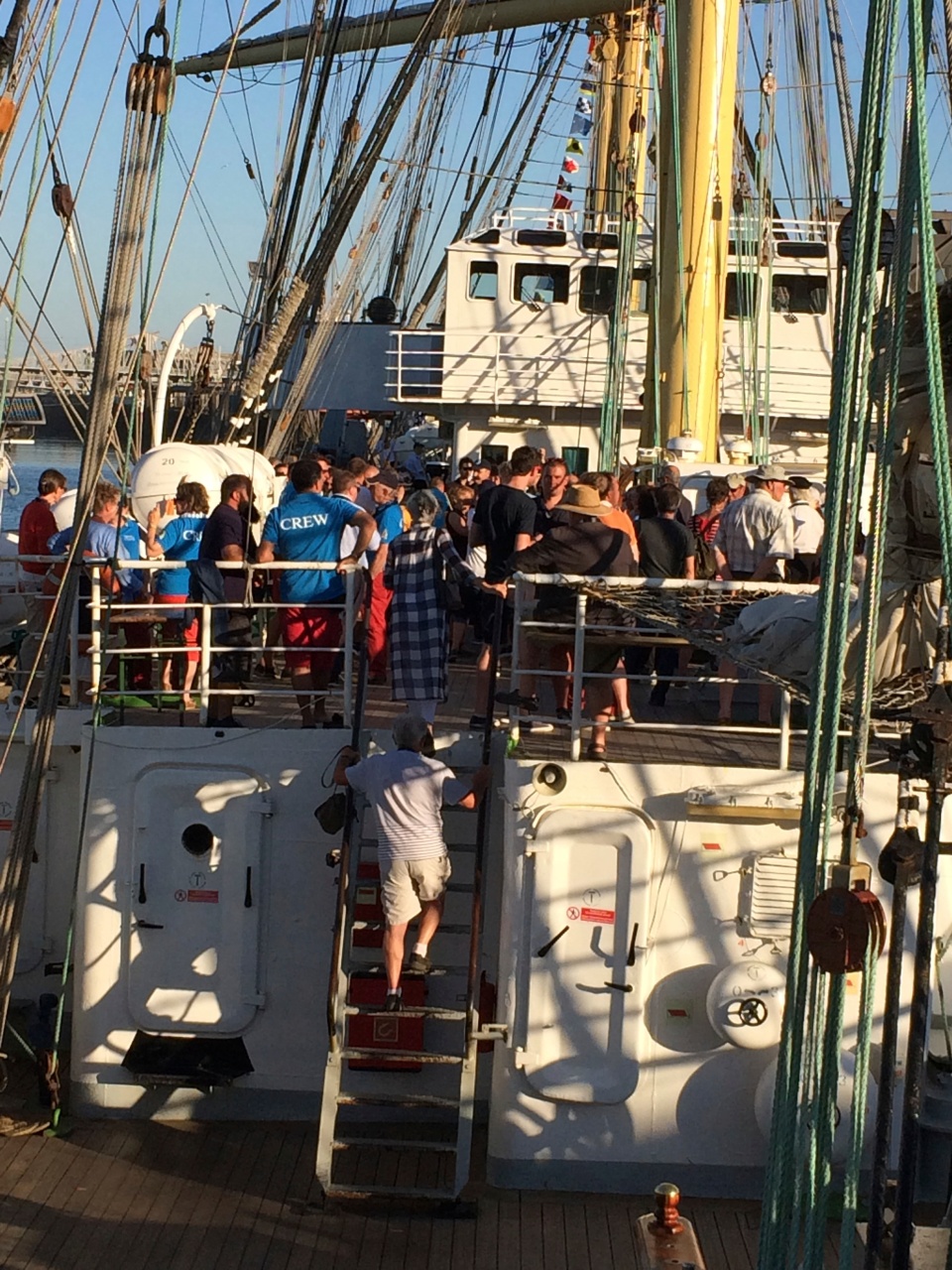 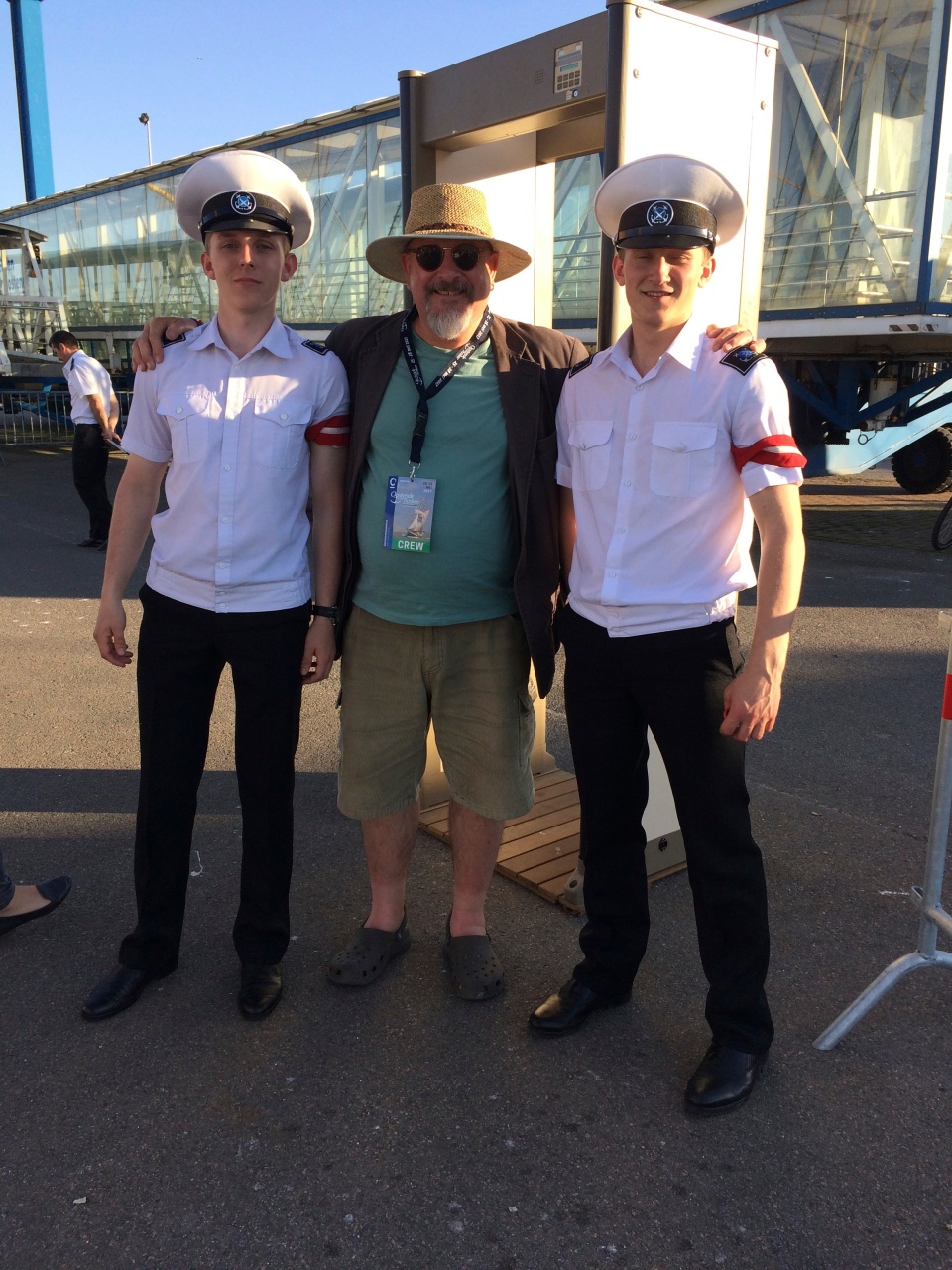 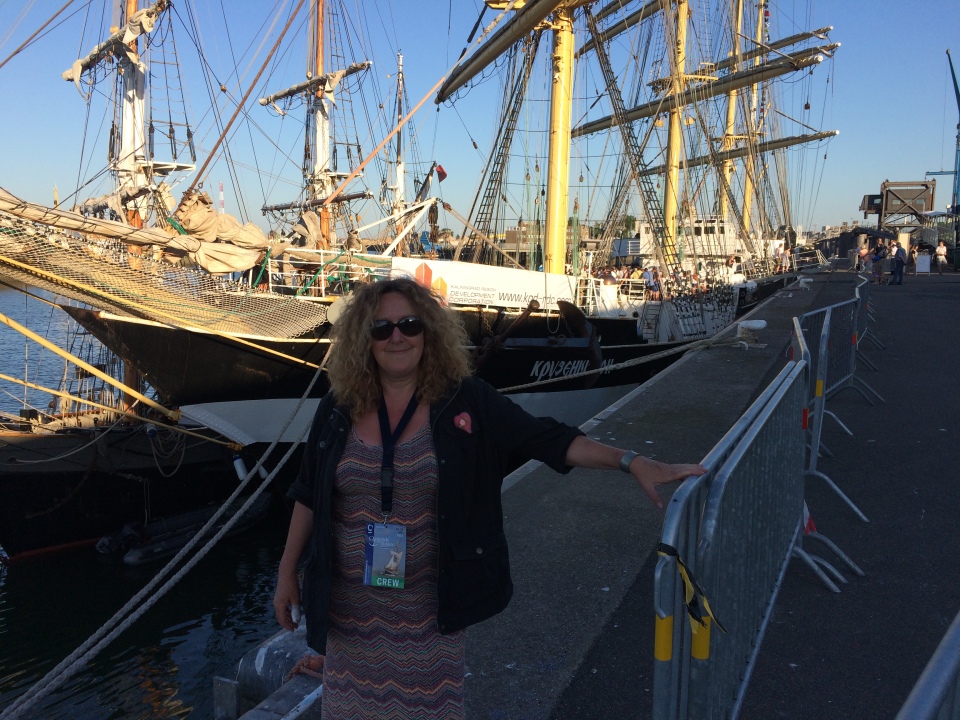 On the Saturday morning we all assembled for the Crew’s Parade to the City Hall where we were greeted, once again in Flemish, French and perfect English, by the new Mayor of Ostend and Hubert. Not knowing any Dutch at all, and only managing to master ‘good day’ and ‘thank you’ during our stay here, I felt suitably humbled by the superb linguistics of the Belgian and Dutch people we met. 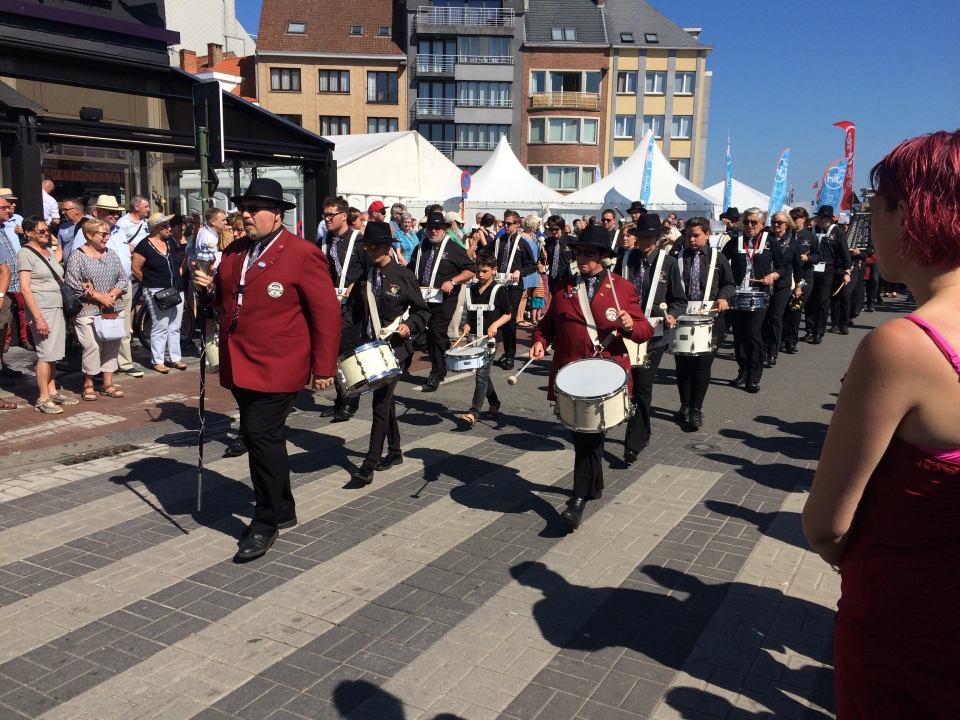 The Parade gets going 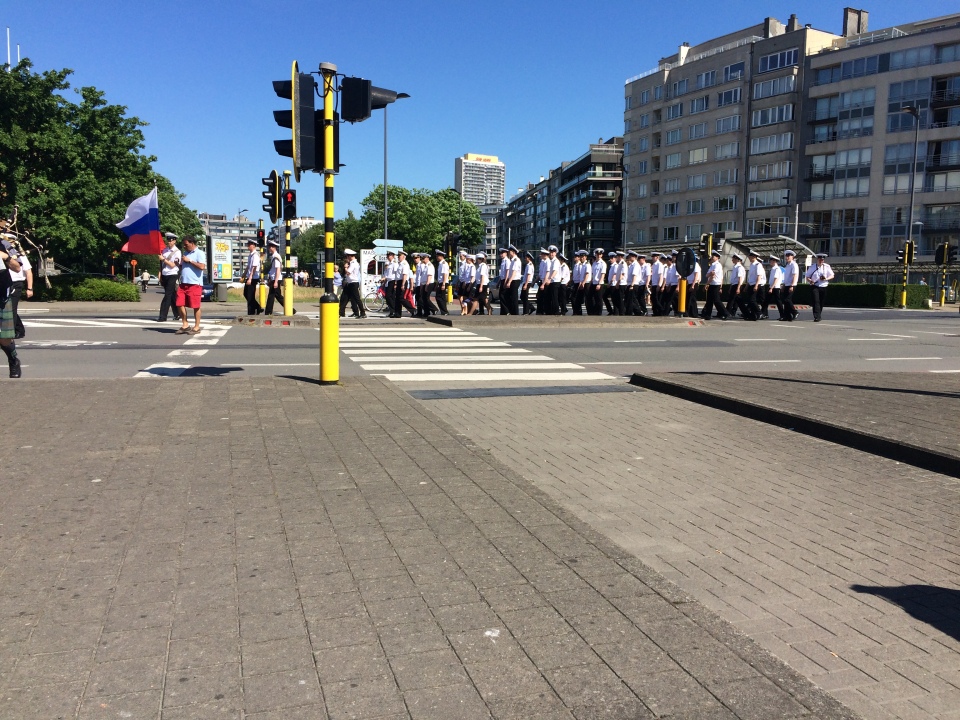 With the Russian Cadets bringing up the rear 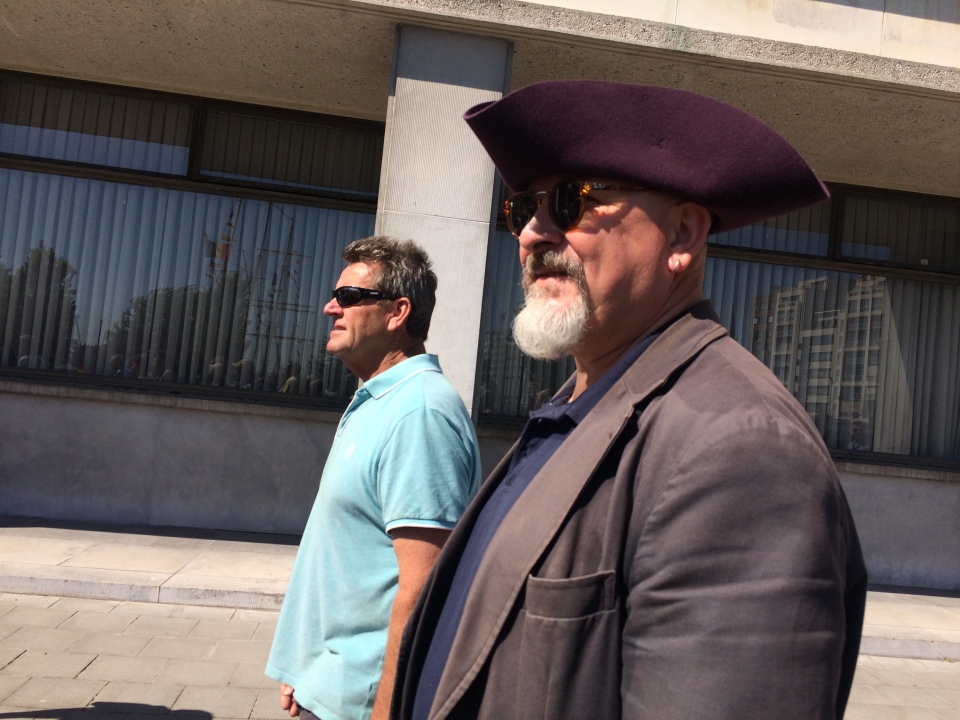 The boys doing their best to keep up… 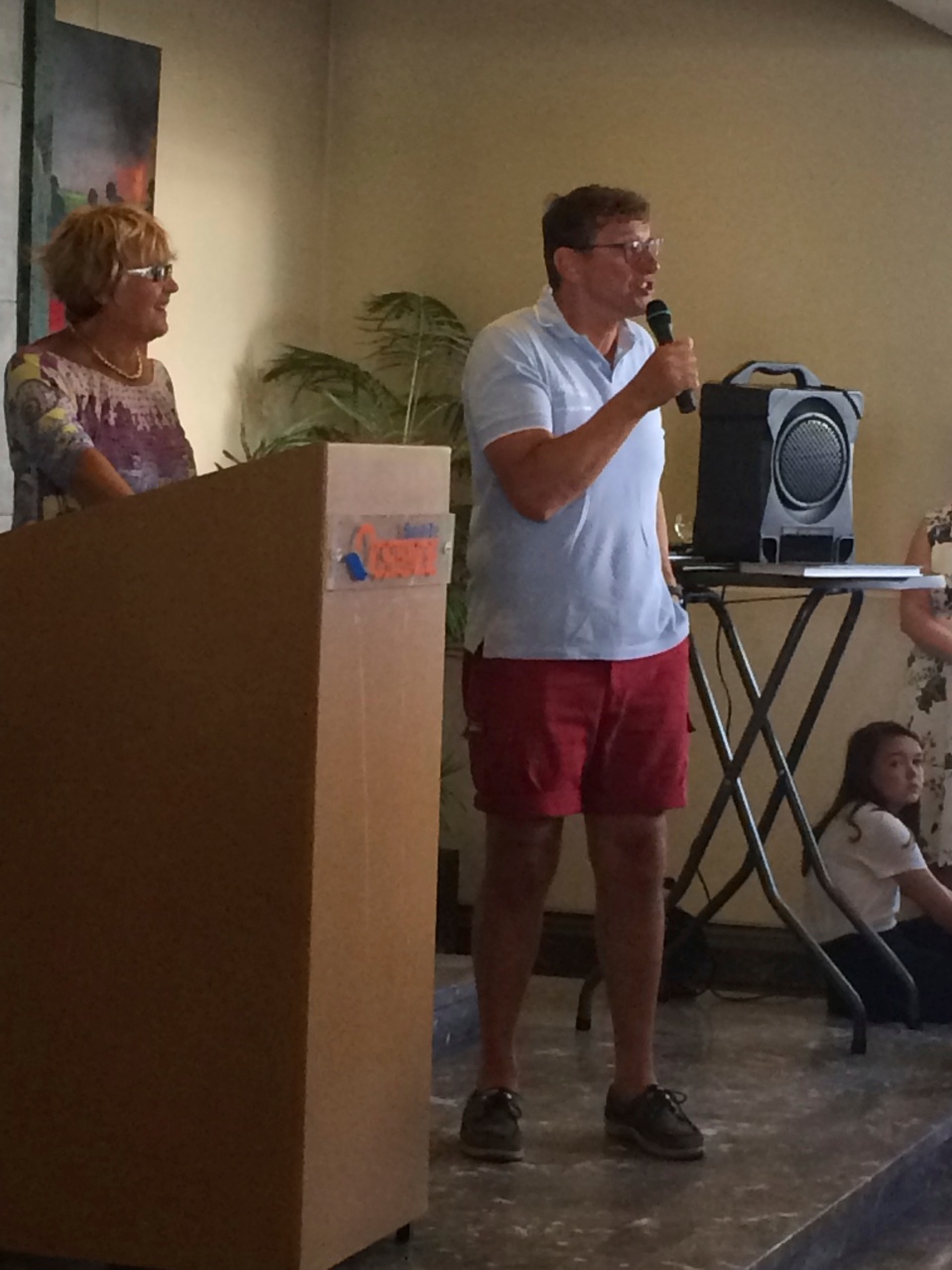 Hubert on the podium

The Festival wrapped up on the Sunday with all vessels sounding their fog horns at 1800 hrs. We had locked out of the Mercator Dock at 11am, along with Sue & Howard who were heading for Flushing, as we needed to leave early the next morning to catch the tide back to Harwich, and we headed to the Royal Ostend Yacht Club at the end of the harbour, a tram ride / medium walk from the centre.  Just finished lunch after berthing when we saw a dark rib coming up river with three sets of reflecto shades on board… “Bit James Bond”, says Clive, and lo it’s the Douane and on they hop… I offered them a cup of tea in great British fashion. Non! was their response. After an hour of paper shuffling, checking our passports, radio licence, sailing certificates, registration document, engine size and serial number, etc, they hopped off… This drove a coach and horses through our plans to get back to the Festival for the fog-horn blasting! Ce la vie! We instead got back for about 7pm and went for dinner at a great restaurant, the Den Artiest on Kapucijnenstraat, with the crew of Maryll, Keith, Jules and Tony. A fabulous end to the week.

Our crossing home was beautifully uneventful, taking 12 hours to reach Harwich, in good time to get a nights rest before Libby’s funeral on the Tuesday. Though we had the sails up, we ended up motor-sailing as the wind dropped right off, frustratingly. The sails added a couple of knots of speed and we averaged about 7 knots. Without the engine we would have taken about 36 hours!

We passed a few ships on the way home, including a cruise ship once back in the Stour 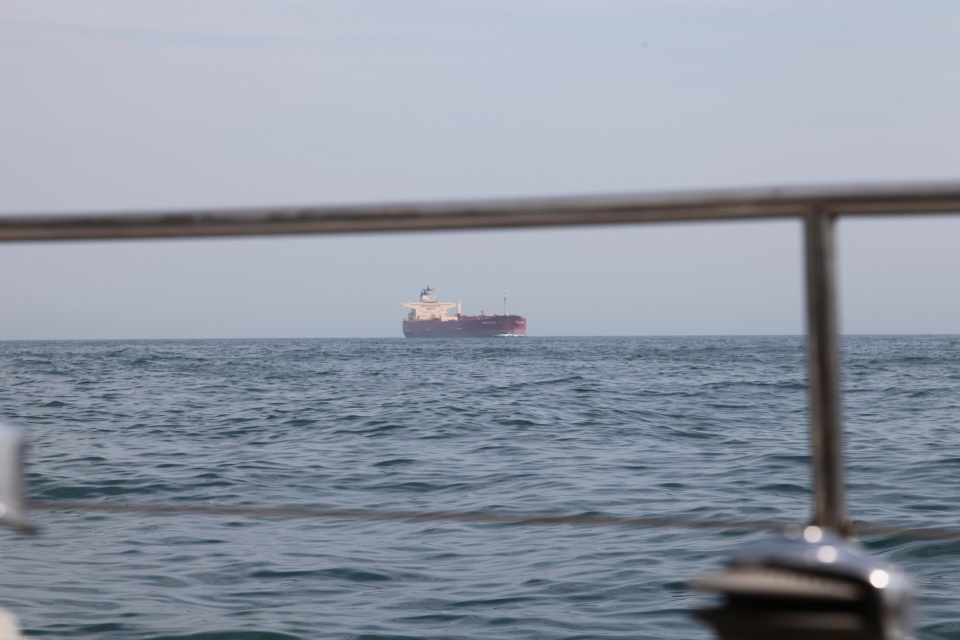 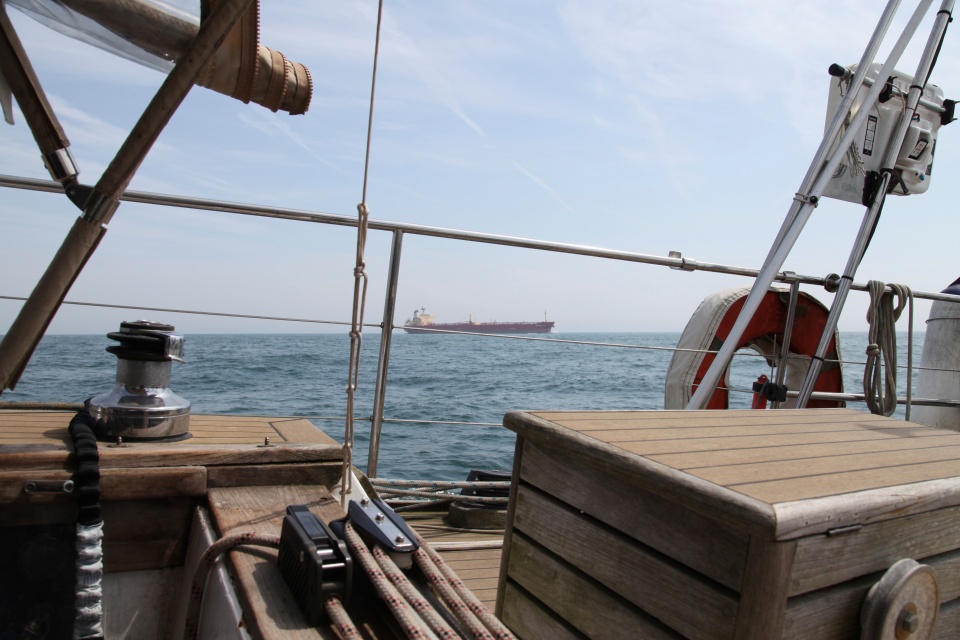 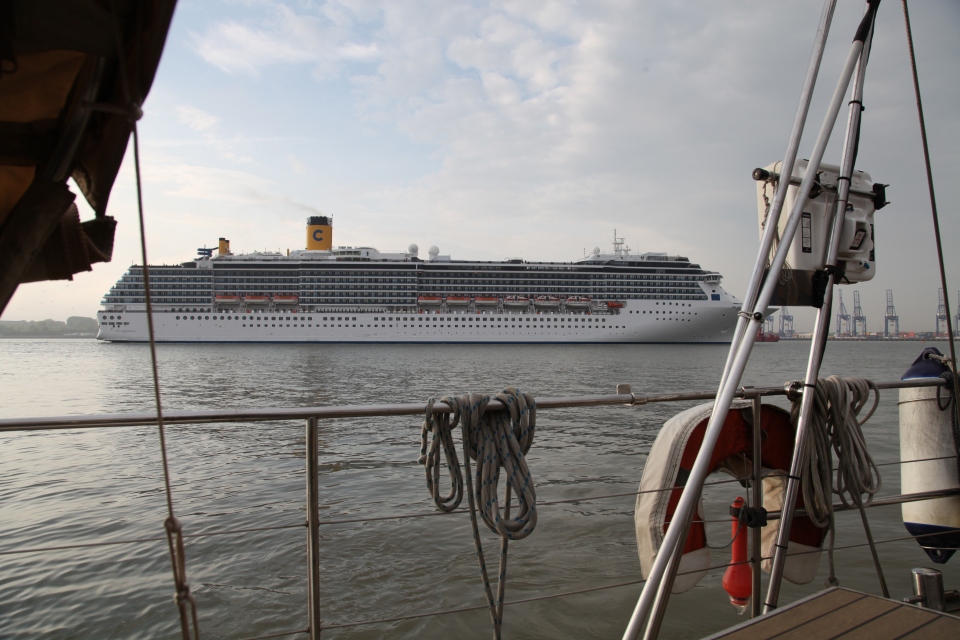 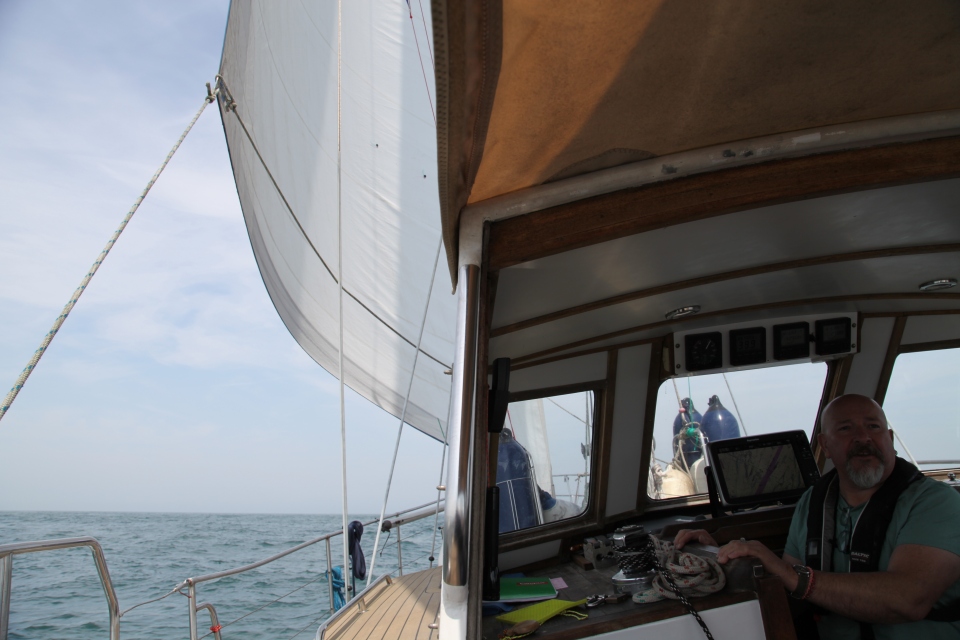 Clive in the dog house 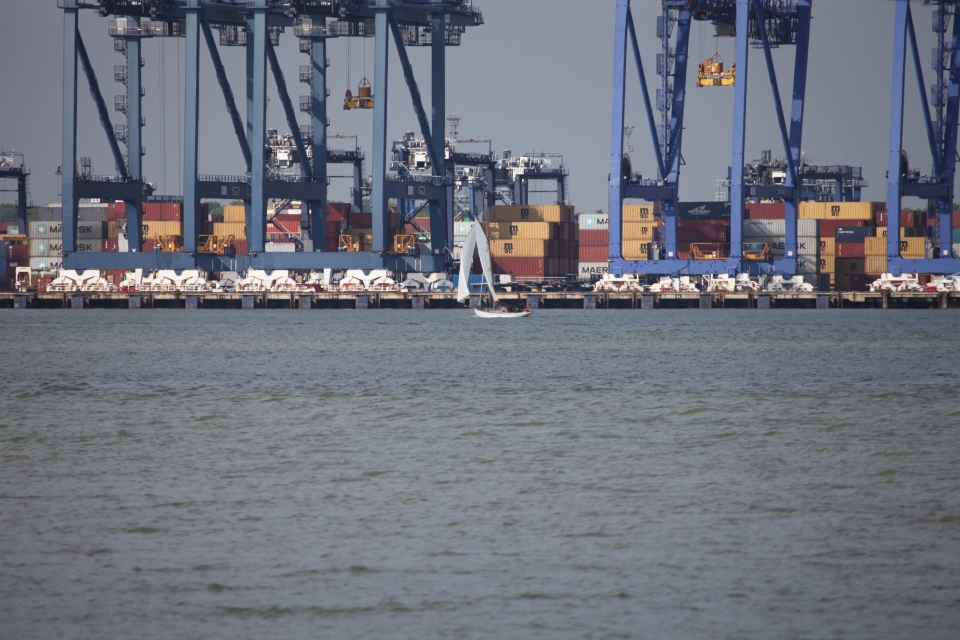 A suitably good send off for my lovely old friend took place at Hatfield Broad Oak church, attended by many who came to celebrate Libby’s life. The church had just had its annual flower festival and along with brightly coloured garlands for us all to wear, the atmosphere was lifted by the beautiful flowers. And though it was so sad, spending time with lovely old friends helped to lift the spirits.

When we were aboard the Kruzenshtern we met Bret and Sandy, owners of a large Dutch Barge called Rival. They were heading back to the UK after seven years of cruising the canals of France, Belgium and Holland, to settle in Woodbridge, just north of us in SE Suffolk. They were planning on motoring her over on the coming Thursday and were keen to find somewhere to stop still until the spring tide on June 9th / 10th. I blithely suggested Harwich and I gave them the contact details for the pier masters. As we were approaching Ha’penny Pier I called the pier master to make sure we were able to berth on the pontoon and sure enough, he’d just spoken to the Rival crew and they were booked onto Ha’penny Pier from Thursday, thank you very much Ms Davies. And so began their adventure…

All was well, lovely sunshine and light airs until last Tuesday when a storm whipped up, the heavens opened and the 100 tonne Rival tossed furiously in the waves hitting the pontoon. Sandy, Bret and their two dogs were forced to abandon barge for 24 hours, being lifted off by a team of butch chaps before tying more lines onto Rival, adding fenders and tyres for protection for both the pier and the vessel. Sanctuary was offered in Castlegate Street for canine and human alike until a room at the Alma Inn was secured. By the following evening the winds blew to south-west once more, and though they continued to blow hard, the direction ensured the rough water subsided enough for comfortable habitation. By this time we’d all become firm friends, apart from the pier masters who now glower at me for daring to introduce the new invaders…. 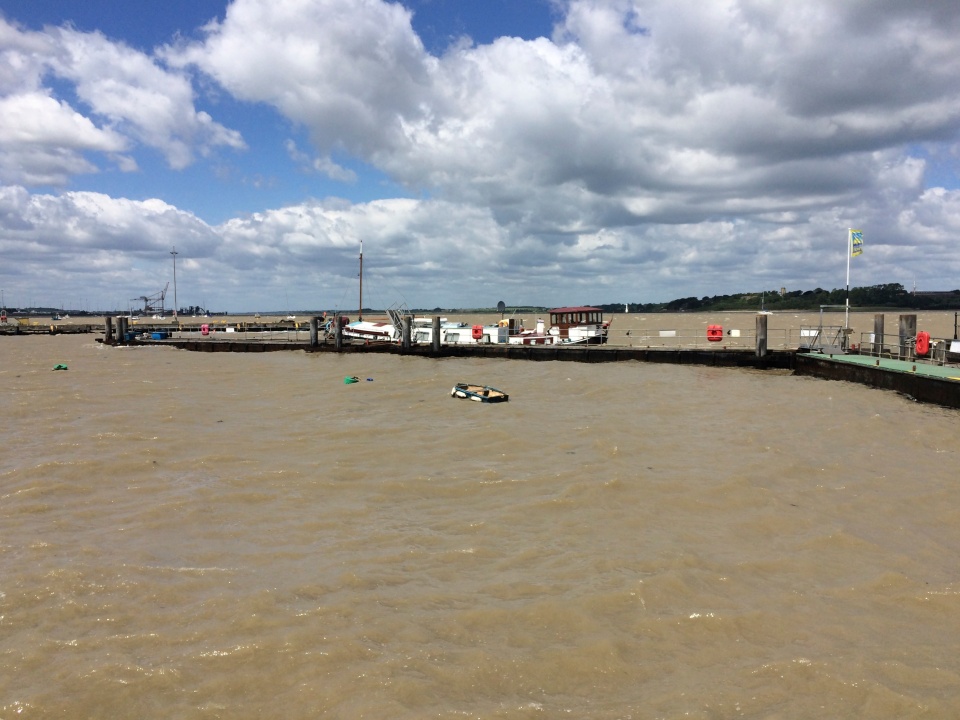 Rival looking fairly comfortable in the rough water, riding the swell with the pontoons 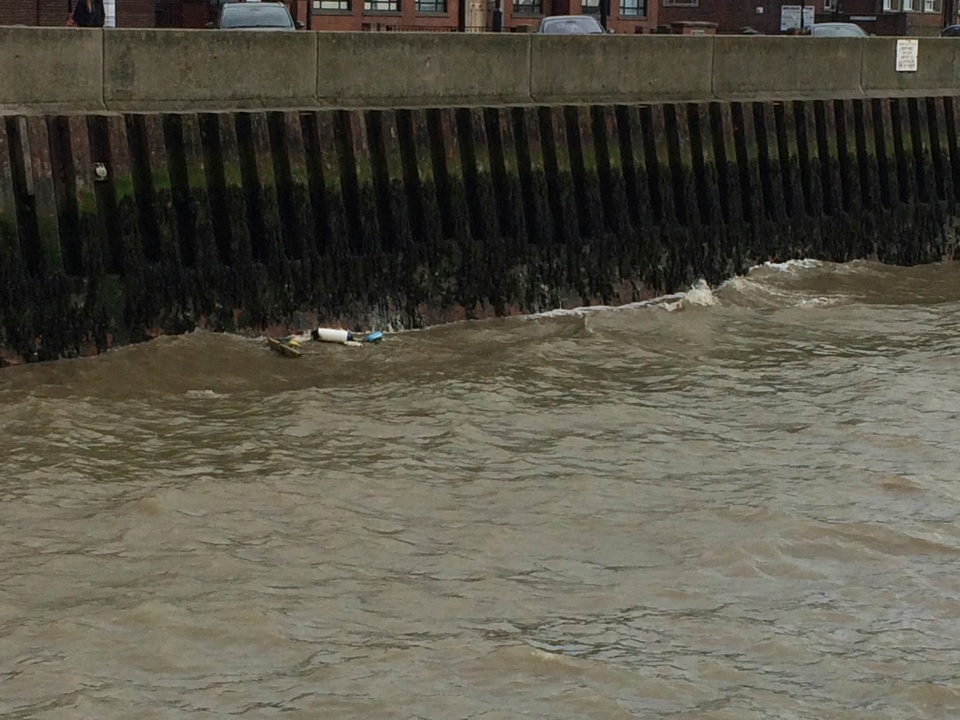 The barge successfully navigated to Woodbridge on Saturday with the help of a barge skipper and old friend of the couple, John Timms, and I drove to Felixstowe Ferry to photograph them entering the River Deben – a tricky entrance with a famously inhospitable bar, and I’m not talking where you get served beer. Rather an underwater dune of shifting sand eager to ground unsuspecting sailors, and to be approached at rising to high tide. I didn’t quite pick out the whites of Bret’s and John’s eyes in the wheel house as they headed for the beach, though I tried! Clive would have loved to go with them however he’s started his dream job once more at Hamford Waters for the summer months, counting little terns and other rare birds, checking the seals health and towing miscalculating sailors off the mud banks and oyster beds. A blustery weekend though thankfully without the rain. 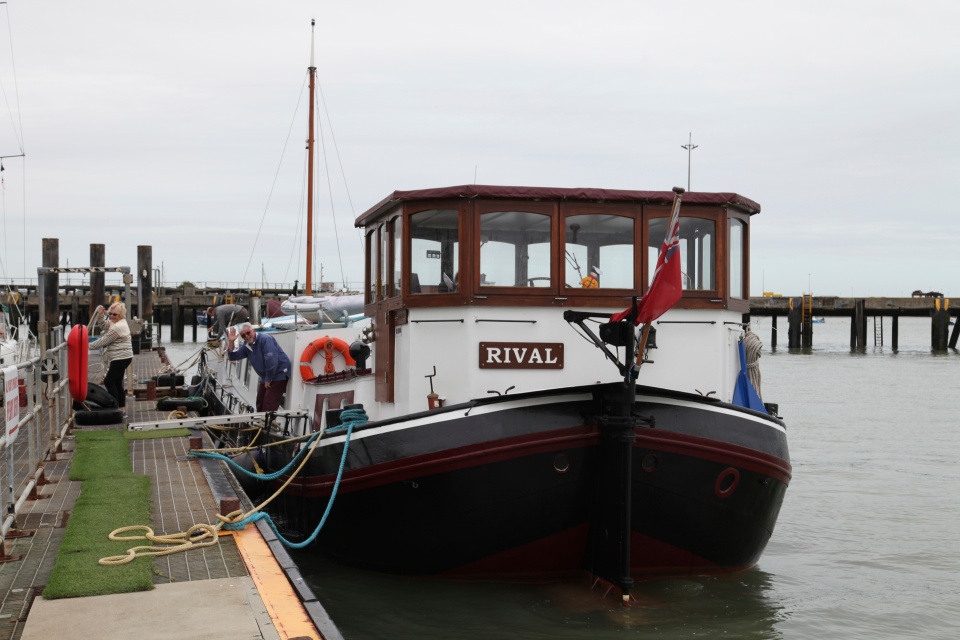 Rival and crew preparing to leave Harwich after their adventurous week 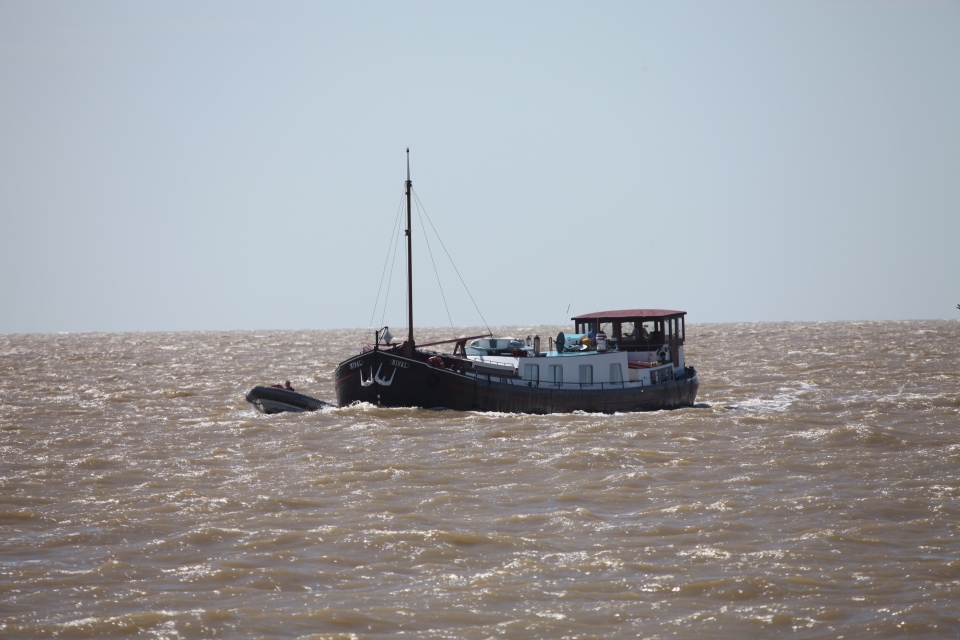 Approaching the Deben, just over the bar 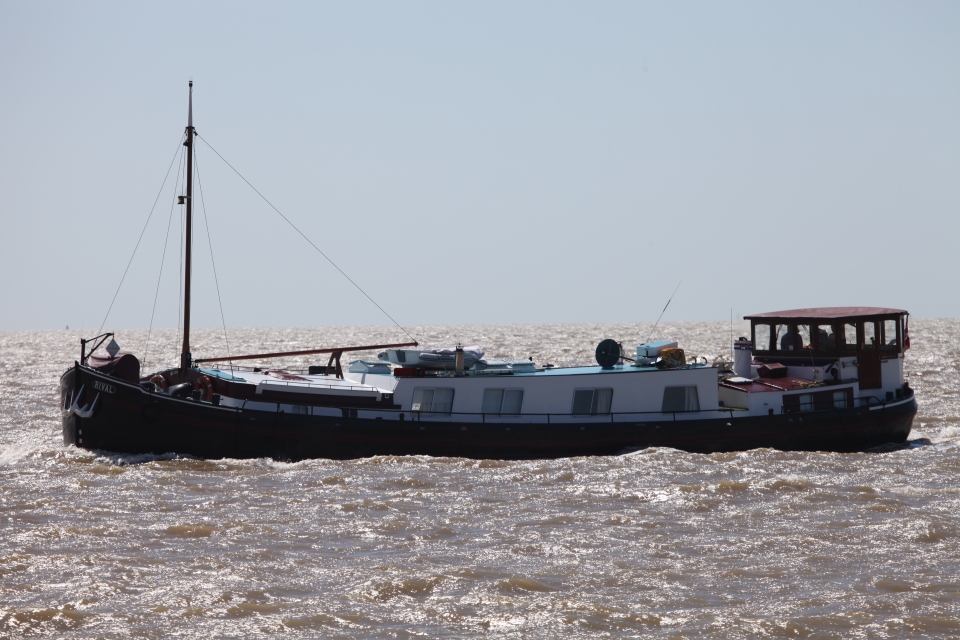 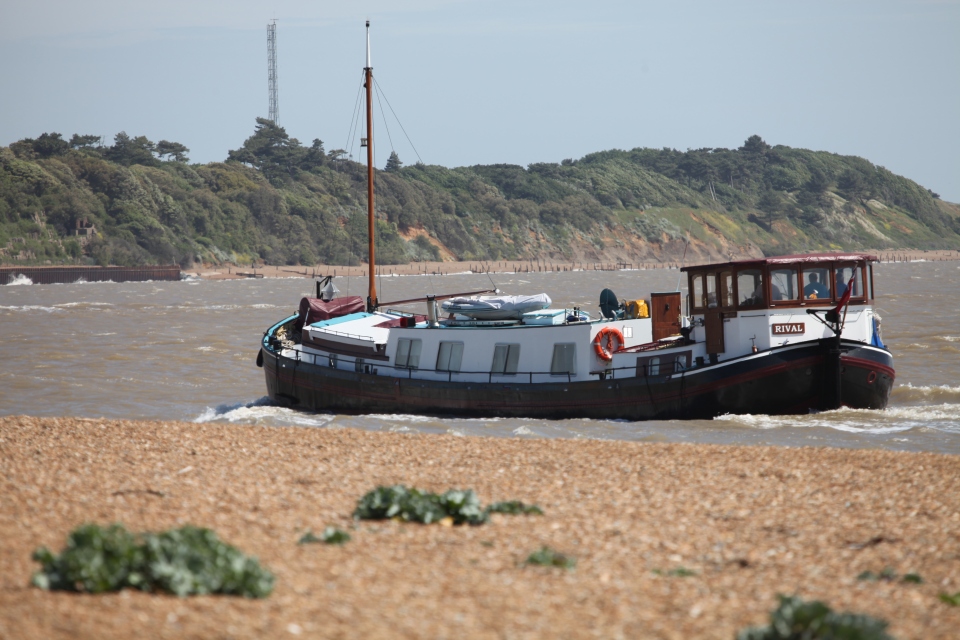 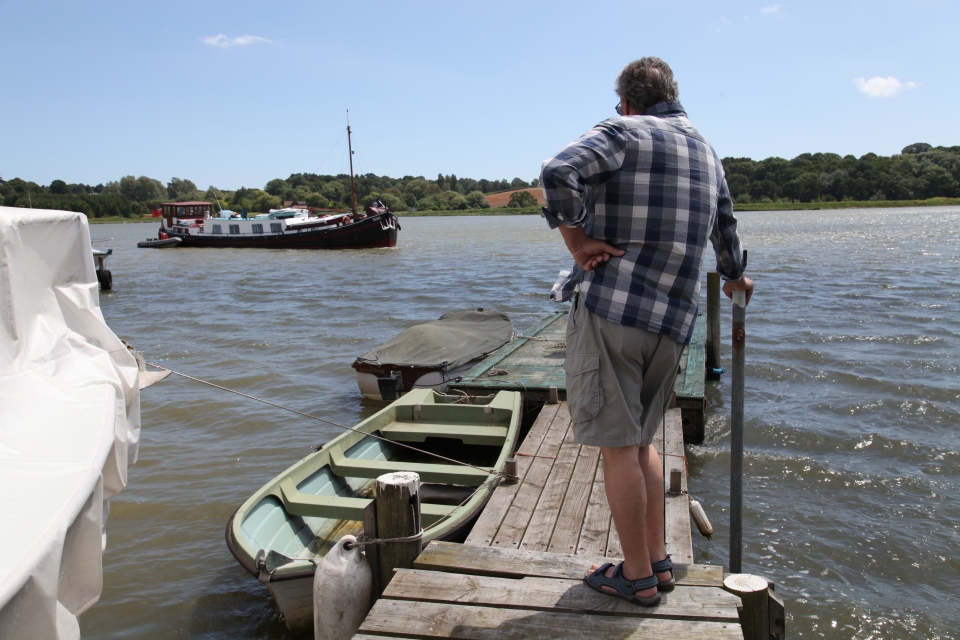 Coming in to their new home up river, one of their new neighbours and an old friend of theirs, Chris, ready to help them in 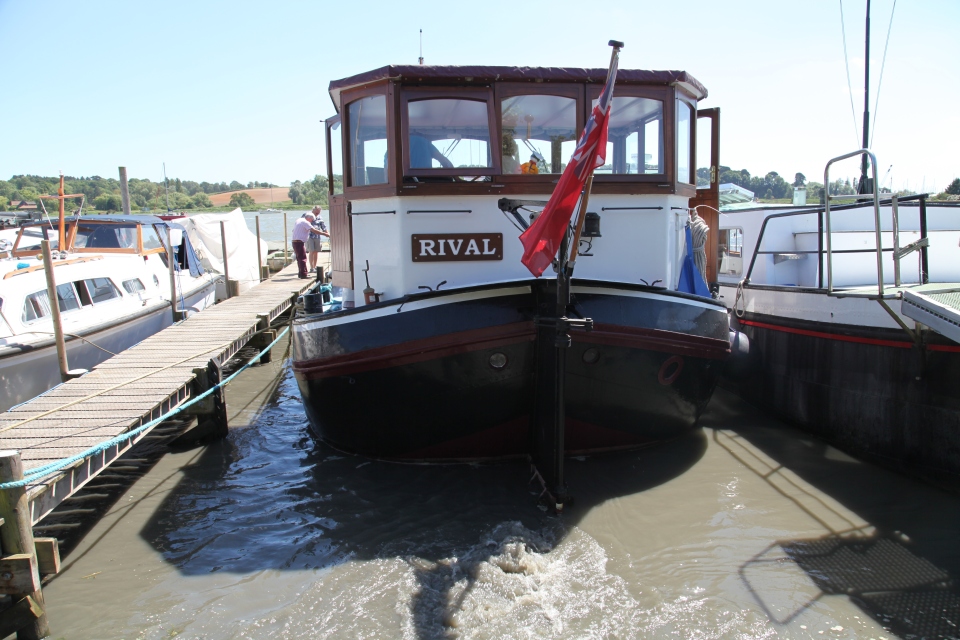 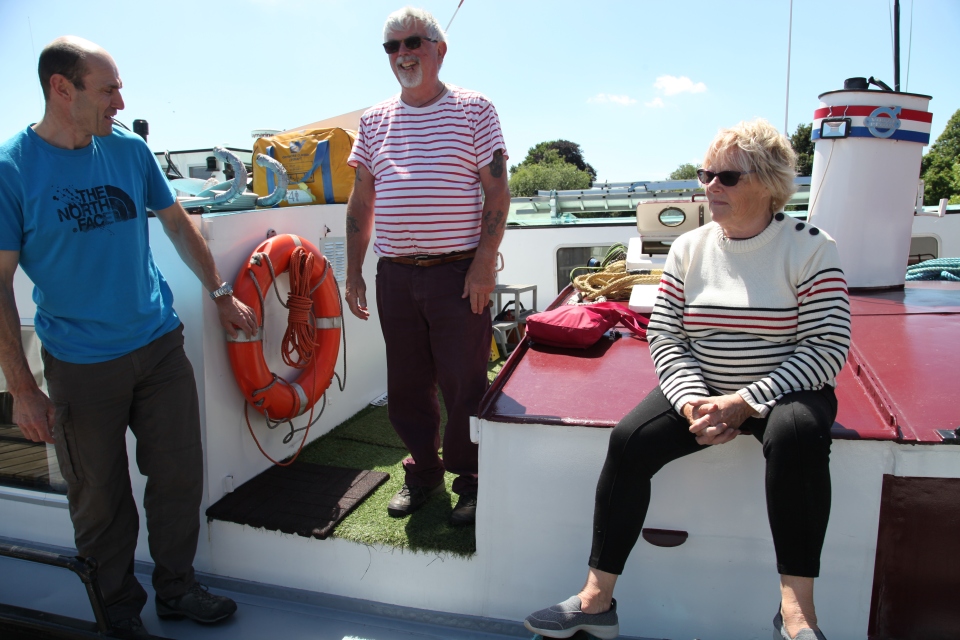 Mercator Marina gets 5 out of 5, lovely new shower block, spotlessly clean and though tokens are needed for the showers, the water is unlimited and lashings of it.

Royal Ostend Yacht Club gets 2 out of 5. A little jaded, though functional, and you pay an extra 3 Euros for the use of them. You are unable to adjust the temperature of the water in the shower and it got hotter and hotter and hotter until it was almost unbearable.

1 thought on “Ostend to Harwich”