This is a good place to stop awhile while we gather our thoughts, make lists for repairs we need to carry out and decide where we go and what we do next. We have another funeral next week, our lovely friend Captain Andy Adams from Harwich who died about three weeks ago, so we’re heading homeward on Monday for a few days. I’ve decided I’ve had enough of funerals for one year, this will be the fourth. I want weddings and birthday parties please. My parents are celebrating their sixtieth wedding anniversary in November so we have that to look forward to at least.

It’s great being here with Clive’s brother Jason and sister in law Rikka just up the road and we’ve seen a lot of them. We all caught a ferry to Dartmouth on Sunday in the rain – yes Brad, rain, lovely cool rain drizzling down our cheeks as we sat out on deck determined to get a good view.(Brad is a good friend from Arizona, which ought to be renamed Aridzona, who always makes envious comments when hearing we’ve got rain.)

Dartmouth is very town, very beautiful, very touristy and very pricy. One shop we’ve renamed the F*@x Off shop because every time we looked at the price of a cushion, £250, a skirt, £250, a photograph, £210, a shirt, £280, the stock response for all four of us was F (three blanks) Off. We backed out into the rain, tears of laughter mingling with the steady downpour as we tried to find somewhere for lunch, plumbing for the yacht club. Trouble is when the weather is like this in the height of the summer holidays, everywhere is full as folk try and escape the wet.

It brightened up as we headed back to Torquay via Brixham where we were joined by a large dolphin which escorted us back across the bay. He was a beauty! The other unusual appearance this year along the south coast has been the enormous jellyfish. Alas I only got photos of the latter as they swam or more wafted round the marina. 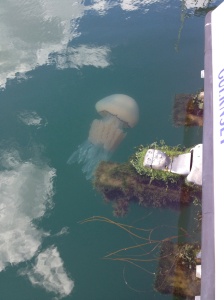 Jellyfish in Torquay harbour, along side the stern of a boat approximately two metres wide – which gives an idea of its size. They’re all about this size too.

Repairs include treating rust spots on the outside of the cockpit and getting these painted with about five coats of paint (each layer taking eons to dry thoroughly before the next), and fixing sealant round a couple of leaky windows (also on the cockpit) which have been allowing water to seep through into the saloon, run down the 12v panel and onto the navigation station. A rigger is coming out this afternoon to see if he can repair our anemometer at the top of the mast. I would of course go myself, if I was twenty years younger, fit, and had a bosun’s chair. Any one of those three would be good!

Aha, as I was writing that last bit the rigger arrived, scooted up the mast hooked on to our mainsail halyard with me pulling the rope tight as he ascended. All looked good and he took out the anemometer and put it back in a couple of times which seems to have boosted the connection. The wind speed seems to be showing now however the wind direction needs calibrating. I do hope that’s worked. The only thing he thought might have caused a glitch the last few weeks was some condensation within the top of the mast. We shall see….

Chris the Rigger up the mast

Cpn’ Jack is still stinking of paraffin as he wallows in his newspaper hammock, hoping to soak the remainder out, and this afternoon I’ve done a repair of Fergus’s tail using my recently founded felting skills. I even added a bit of extra white to his tail and he’s looking a damned fine beast if I say so myself. Not quite as beautiful as his true canine double of course.

Fergus with his repaired tail 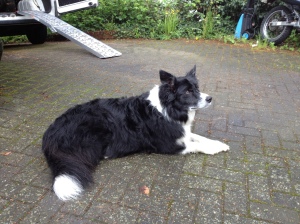 We took an excursion to the cinema last night, built originally as a theatre in the 1930s it’s a great little place about a ten minute walk from the harbour. All was dark when we got into the auditorium and we had to use our mobiles to find steps and seats, along with the dozen or so other punters, so there was much laughter and feeling of Blitz camaraderie as we settled down with our popcorn to see the latest Guy Ritchie film, Man From U.N.C.L.E.. It was great, a real gem of a film, superb humour too, very much of the 60s genre even down to the acting. I do hope he makes more.

Now the next coat of paint before supper…..

Bog watch: Torquay town harbour gets a ZERO. The showers and toilets for the use of sailors is the public bogs with a couple of cubicles converted into showers. With an overwhelming perfume of uric acid, no loo seats, stupid little cubby holes to put your hands to get a) a squirt of soap, b) water and c) drier, cleaning your teeth is a comedy as well as a hazard. Shaving is even more challenge with the silly sinks (so Clive told me) and there are no mirrors. The showers probably work quite well, but why put yourself through the pain. 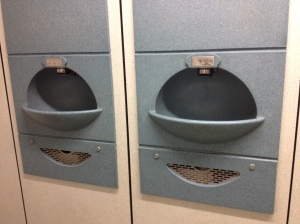 Silly sinks… Try using these to clean your teeth or have a shave!

8 thoughts on “Running repairs in Torquay”